The trains of today and of yesteryear 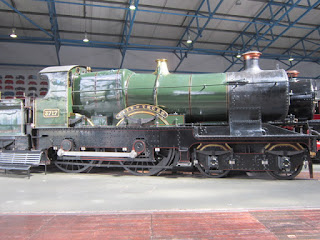 I took this picture at the National Railway Museum. One of many. I am uploading it because it illustrates my point and because it's an excuse like another to show another nice picture of a locomotive that was in service back when railways were this country's pride. I recently blogged about how much I long for a time of train travels I have never known. I love trains, I always have. But yesterday morning, the train of my commute got cancelled because of some trouble on the line. No replacement buses or taxis were offered by the train company. I had to pay the taxi myself. And it struck me like it always does: what was once the pride of Britain's transport, something that modernized the whole country and then the world is now in a sorry state. Train companies now aim to disappoint, when they don't aim to infuriate. And that's it really. Rant over. Moral of the story: how the mighty have fallen and they should be ashamed of themselves.
Posted by Guillaume at 21:34

I tried to read this time and ended up singing Robyn Hitchcock's "Trams of Old London" both times.

"In the blitz they never closed / Though they blew up half the roads / Oh, it hurts me just to see 'em / Going dead in a museum."

I don't know anything about British trains, but that does seem to express the same kind of sentiment as you.

Train is my preferred method of travel, but the service they offer is nowhere near what it needs to be. I could write a list here of the issues, but I know you would already know them. I remember travelling to Clevedon from west Wales, I was 9, the train was billowing out clouds of smoke as we trundled along, the Severn Tunnel was long, dark, and rather scary, but oh! what an adventure that kicked off my very first proper holiday.