A cat in autumn 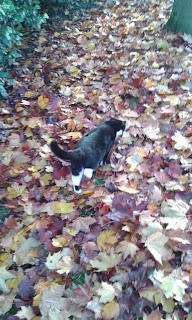 Remember Domino, the black and white cat who has started dwelling in the communal garden where Odin used to dwell? Well, there has been some developments regarding his situation. He has been spending more time here, including in our flat and an old lady's flat downstairs. Recently, my wife and I discussed (briefly) the situation with his owners. It turns out they don't mind (one would say they don't care): they are cool with Domino, who goes by the name of Ruby or Ruben, spending as much time as he wants with us. In fact they found him the same way we found him: he showed up in their garden and they kept him. So the mystery of our black and white feline friend remains. We will probably take an appointment with a vet to see if he is micro-chipped.

But I mainly wanted to blog about Domino to upload this picture, which I took on Halloween day. He was exploring the garden which was covered with leafs and I thought he looked adorable like this. There is something about cat prowling on a thick bed of leafs on a cool autumn day. I think he loves the season just as much as I do. I may never feel with Domino the connection I felt with Odin, but I love spending time with him like this.
Posted by Guillaume at 20:58

Clearly, Domino is a cat who controls his own destiny. I'm glad he likes you so much!