This picture needs a scarecrow 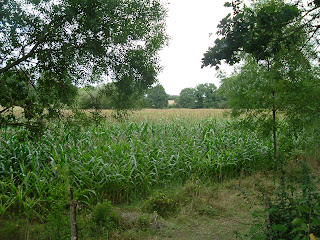 I took it in Brittany in August last year, I liked it enough, I like harvest pictures for some reason. But I thought there was something lacking. I found out recently after blogging this post: it needs a scarecrow. It would have given the picture some ominous, sinister atmosphere, even though it was a sunny day. Dark and stormy nights are useful, but not essential to create terror. You can easily find the right ingredients for a scary story in the middle of a warm summer afternoon too.

My long time readers know that I am fascinated by scarecrows, because of course of their scary, unsettling appearance, which I blogged about before. Like my brother said, they are more efficient scaring humans than birds. As a child he was terrified by a stuffed scarecrow that was pinned on the wall of our bedroom. What were my parents thinking? I am naturally fascinated by bogeymen and scarecrow can easily be the stuff of nightmares. I think part of its appeal as a terrifying figure is that it is a primitive one: it is associated with seasonal changes, harvest, food (just like my favourite holiday), but also with danger (again, just like my favourite holiday), if even it is an indirect one. Scarecrows were protecting food against the most implacable form of looters, birds, in a way the most vicious forms of looters as they were stealing food. Of course, scarecrows had to look menacing. They were not the threat themselves, but maybe like all guardians they ended up scaring up those they were supposed to serve.

Anyway, for those who think Halloween is not coming soon enough, have a look at this picture and think of a scary story to go with it.
Posted by Guillaume at 21:17

Oh how I love the scarecrows! Some can indeed be sinister looking, but I love them still! :o)

Oh I have never thought about scarecrows being scary but maybe they are. Certainly the ones at Jadin d'acclimatation are too chic to be scary. Glad you like my photos. Merci pour votre comments! Mon français est très terrible. Pardon, svp! :)
V