A Witch as a Birthday Gift 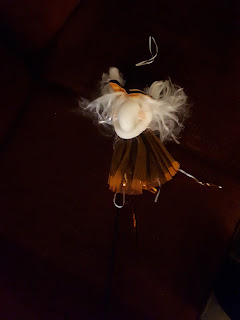 Today is my brother PJ's birthday. He is celebrating it with my family in Montreal. So today's countdown to Halloween is a bit about his birthday, but more specifically about this little lady. You see, as PJ's birthday was fairly close to Halloween, often the celebrations had a bit of a spooky feel to it. So one year, I believe when he turned six or seven, he received this witch as one of his presents. My parents had bought it at an artisan fayre. I was often envious of his birthdays, because he seemed to always get the coolest presents. Anyway, this witch became a staple of our Halloween Game. She was of course an antagonist to our heroes. I don't know if she ever got a name, for us she was always the Witch. She gave nightmares to my brother, but also gave us so much fun.