About the Phantom of the Opera 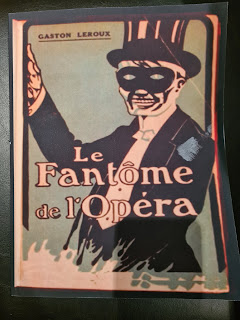 For today's countdown to Halloween post, another trip down memory lane, sort of. I had been wanting to reread The Phantom of the Opera  by Gaston Leroux. I am one of the few people who discovered the character through the novel and not the overrated musical. I had in mind to read it this year and share my impressions during the countdown. I wanted this year to be about le Fantôme, as it is sometimes about vampires or Jekyll and Hyde, or whatever. So I checked about all the versions available in French on Amazon and settled for one with an image of the original cover. It was cheap, but hey, I thought it should not be an issue. Big mistake. This is a terrible edition: the pages are not numbered, the editing is dreadful and while the text is in original French, biographical notes on Leroux are in English. You can see it was roughly patched together for suckers like me. And I can't read such poorly edited book, it's against my principles. I will return it. A darn shame, I wanted to rediscover the Phantom of the Opera and make you my readers discover the real deal, it will have to wait. But you can read how I first came to the novel in this post from 2019. Oh well, maybe next year. But at least you can enjoy a cool cover.

It is a cool cover. Too bad it is such a mess.