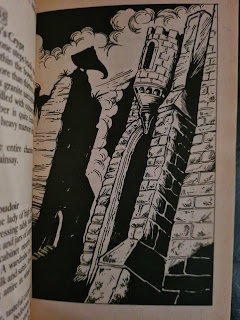 For today's countdown to Halloween post, yet another trip down nostalgia lane. My longtime readers may remember that I sometimes blog about the Dracula Game, a make-belief game my brothers, my friends and I played when we were young.As we hadn't read the original novel, we used  J.H. Brennan's gamebook Dracula's Castle as inspiration. Now as I wanted to blog about it again, I discused with my brother PJ about the reasons why this make belief game worked so well that we still talk about it to this day. One of the reasons resides in the antagonist himself: Count Dracula is not only a vampire, but a centuries old nobleman and ruthless warrior, who dabbles into sorcery and whose ultimate ambition is world domination. This is a worthy adversary for a group of vampire hunters, suitable for the ensemble cast that we made with our friends. The other reside in the setting itself: a Carpathian castle and its surroundings, especially as described in the gamebook, had plenty of atmosphere and was also very suitable for a classic "dungeon crawl", with lots of monsters to fight, and not only vampires. Ghouls, zombies, all sorts of undead, demonic entities, wolves under Dracula's control. There is one last element that made the game memorable: it allowed our characters to have all sorts of cool weaponry and equipment. We had of course stakes, crucifix, garlic, holy water, as well as conventional weapons: guns, knifes and the likes. Anyway, as we never finished the game, I hope this blog will encourage some of your children who have a spooky mind to make their own "Dracula Game". No Halloween could be complete without a bit of Dracula in it.