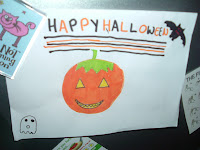 This is a picture of a card my niece gave us recently. It fits the topic of this post. Yes, I blogged about it before and actually at the very same date. But Halloween is coming very soon and I cannot help but feel that when you are an adult, is slips through your fingers and you cannot appreciate it as much. Like many holidays I love, Halloween is deeply rooted in childhood memories.

So anyway, back when I was a child, Halloween was not merely one night of trick or treat, it was also a long make belief game my brothers and I were playing. We had long, elaborate make belief games, this one was very developed. We called it the "Halloween game". We started playing in August, when school was about to start, so we would forget about it. I was the good guy, a sort of Zorro turned vampire/ghost hunter PJ the evil devil general of the Armies of Hell, aptly named Draco, Devadar I cannot remember who he played, I think he was a good guy. The story was simple, even simplistic: Draco was gathering monsters, witches, ghosts and what have you to take over the Earth or something of the sort on Halloween night. Every year he was failing, but just. Strangely, mankind was unsuspecting of the yearly Armageddon. And of course, the story was set in England. When we were going trick or treating, the neighbourhood was our battlefield. The decorations were real evil creatures, the Jack O'Lanterns were inhabited by evil spirits and so on. At bedtime, the story was over until next year. When I hear my niece telling us what she is planning to do on Halloween, I envy her.
Posted by Guillaume at 23:43

I love it...childhood imagination has to be one of the best things we ever get to experience! Your game was well thought out and would possibly make for a good children's book of some sort too. I love your niece's drawing...perfection! :o)