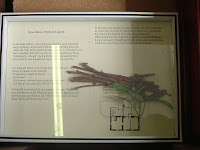 These pictures were taken in the Keswick Museum, one of the nicest town museum I have ever been to. There were a "section" (well, two window displays really) about Cumbria's superstitions. I took picture of them, you can enlarge them if you want to read, I hope the light did not get in the way too much. I like my times in museum to be educational but also atmospheric and this museum had plenty of both. Since Halloween is coming soon, I thought it would be the right time to blog about it. 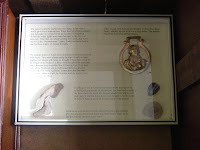 As a child, I had a wild imagination and at some point, I was fairly superstitious: I believed in ghosts, in the Loch Ness Monster, in devils, what have you. And even if and when I did not believe in something supernatural, I was fascinated by old wives tales and ancient irrational beliefs. I knew they were not true, but I was doing as if. As I said in French here, while I did not like the taste of mushrooms, I still kept an interest in them because of their association with supernatural and witchcraft. Especially when they were in a fairy ring, which was called "rond de sorcières" in French, "witch circle". I loved when I could find one on the ground and they were the basis of many of our make-belief games. I wish I had known then about the superstitions surrounding the rowan tree, as we were playing next to one very often. I developed an interest in this one only in recent year, but was happy it was mentioned in the museum display.

So I grew up to become a rational man (or trying to be one anyway), a skeptic and an atheist. I do not believe in the supernatural to the slighest, yet I still have an interest in them. Like haunted houses, superstitions transform the domestic and the familiar into something much more fascinating than it really is and makes people's life more exciting. There is a bit of Don Quixote in all human beings and sometimes imagination takes over our perception of reality.
Posted by Guillaume at 10:53

Must be one of the worst things ever to be "frightened to death by Fairies" ...

... this year there were more mushrooms(or toadstools?), all over the place, more than I have ever seen... wonder if this symbolizes anything in the world of Lore?

Fairies are not always supposed to be nice. In folklore they are sometimes quite sinister, more like witches than loving fairy godmothers.

I just love seeing mushrooms in autumn, I don't know why. Toadstools for me are associated with Smurfs.

We've had an over abundance of mushrooms and fairy rings in our neighborhood this year too. One day, as we were driving out of the neighborhood, (it's 2 miles to entrance) almost every house, or at least every other had mushrooms and fairyrings in the yards seemingly overnight and all at once. At first it was just a neat thing, then as we saw more and more...we couldn't help but let our imaginations run wild and question if there was any more mystical or sinister reason for the overnight growth of all the shrooms! Love fairy rings! :o)