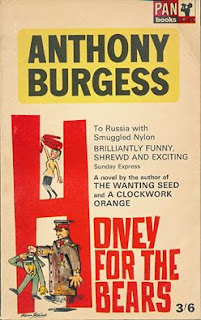 Today is a very special dayt for me: it is my blogging anniversary (see my post in French here) is the birthday of Anthony Burgess, who would have been 99 today. My favourite writer, the author of A Clockwork Orange. This year is also the anniversary of the movie adaptation of his most famous novel. I blogged about it recently. But this is not about A Clockwork Orange I want to blog about tonight. It is a bit sad in fact that the rest of his work remained in the shadow of his dystopian book. Back in 1994, around that time of year, because I had read A Clockwork Orange, I wanted to discover more of his novels, I bought Honey for the Bears. This was a new discovery, the epic comedy telling the story of a British antique dealer selling cheap Western dresses in Soviet Russia, during a holiday there with his American wife. It was maybe the first time I was conscious to read 'true" literature. Even though I had read classics before, there was something about Honey for the Bears that really struck a chord with me. On a comical scale, it treated of serious questions about the absurdity of utopias (always dystopian in practice) and the survival of national and individual identities and cultures against two hegemonic powers. The novel confirmed Burgess as my favourite writer. After it, I went on to find every single book of Anthony Burgess I could get my hand on. So this is the book I want to find, in original English and read this year to celebrate Burgess. Sadly, if there is a new American edition being released, it is currently out of print in the UK. But anyway, there are many other novels, some I have not read yet, to celebrate 99 years of Anthony Burgess. I recommend that you do the same.
Posted by Guillaume at 21:09

I've only read "A Clockwork Orange." But I must say that "Honey for the Bears" sounds delightful. Even though currently out of print, perhaps you could find a copy in a library or a used book store?