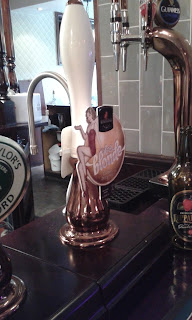 This post is sort of related to the American Independence Day, because the beer I am going to blog about was inspired by American beers. So I found this blonde beer at a local pub, it is from Robinsons Brewery. At first I thought it was called Ditzy Blonde, as in, you know, the archetype (or maybe I should say stereotype). But no, actually it is Dizzy like I am feeling dizzy. And like a short name, Dizzy being the blonde on the label. I guess dizzy sounds more fitting than ditzy: the image of the blonde on the tap (I know the picture is not great) does not look that stupid and when you drink, although you can become kind of a ditz, you have more chances to be dizzy. Anyway, because of the silly yet clever name name, I thought I would try it, even though I usually don't go for blondes. I am still talking about beers. 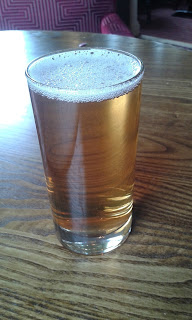 So what did I think of it? First let me say that, while I admire the United States, I was rarely impressed by their beers, although I did enjoy the products of their microbreweries. And one thing to say about blondes in general (blonde beers, I am talking of beers) is that they tend IMO to be as vapid as the stereotype. Easy enough to drink, quickly drunk too, but you quickly forget about them because they often lack character and they are not as good as... Well, you quickly forget about them. I do, anyway, unless it is a much darker blonde. So I go for blonde... beers, when it is nice outside and I want to drink something easy. Which was the case that day. And to be very honest, I cannot remember much how Dizzy tasted like.
Posted by Guillaume at 11:44

I have never heard of blonds, beers I mean, lol, have the best weekend!!!