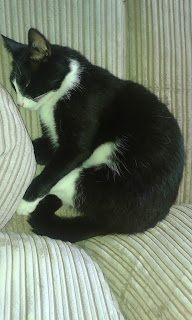 I recently blogged about this new cat who shows up in the communal garden. There has been some development about him and it created a bit of a dilemma. First, he has become more and more accustomed to the people living around here. Some of them in particular: a middle aged woman and her young niece (who is spending summer here with her aunt), an old lady living alone, who apparently lets him in her flat, and well, my wife and I. We have decided to name him Domino, after hesitating between Guinness, Oreo, Prospero (very Shakespearean I know), Freya (if it was a female cat that would have been her name). As Domino has been very eager to walk in the flat, we agreed to let him in sometimes, when the weather was bad. Because of what happened to Odin, we don't want him to cross the street and get run over.

So we invited him in, or rather he did, I mean before we could say yes (well, as far as we can talk to a cat) he had ran in when we opened the door. And since then we do let him in from time to time. Domino settled in easily, too easily I might add. Odin did too, but at least we had the blessing of his owners. Domino's owners, with whom we spoke three minutes all in all, only told us that "he's very independent". We don't even know his real name. Or theirs. And for the record, before we even allowed their cat in, we tried to give him back to his owners, but nobody was there when we knocked. And we know others, at least two, have let him in their apartment from time to time and fed him. Even if Domino's true owners say he is very independent, their cat keeps asking for attention the moment we go out. So... We are in a bit of dilemma. I don't want to be labeled a catnapper. And he is no Odin, who was a true independent (if demanding), cat: Domino is far less aloof, far needier and far more vocal. All the same, it feels good to have him around and to see him wolf down the treats we give him. And he is happy around us and here. Especially since that when he is not here, he is in the garden, spending his days sitting in the mud until somebody comes to him and cuddles him. But he is not our cat. And I do not want him to develop a dependence on us that could be dangerous for him when we go away. Not to mention that we do not have the right to own a cat. I couldn't care less when I had Odin, but these are different circumstances. So this is our feline dilemma.
Posted by Guillaume at 21:56

that is a problem,, so sad that there are so many neglected animals, his owners say he independent but why is he seeking attention else where,,

It's so sad ! Maybe you can ask his owners of they would be willing to give to you?

Let the cat decide to do what she wants. Cats usually do.

or what "he" wants, rather

Thank you all for commenting and for your advices.
@Andrew-Thank you for visiting my blog. Where/how did you find it?