A new cat in the neighbourhood 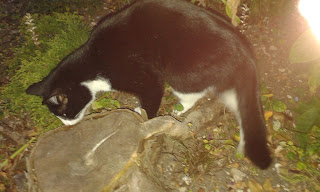 This is the new cat that has been dwelling recently in the block's garden. He's been coming to the garden a lot during the evenings. The first time I saw this cat, he was meowing in the bush where my cat Odin used to dwell. Since Odin died tragically, I add an odd feeling of déjà vu. This cat was at first both cuddly and sometimes a bit scared, but he warmed up to us quickly. Like Odin, he gained the affection of the residents here. He is very affectionate himself, running against me, standing on my legs when I bend down to stroke him, he even touched my face with his nose, a sign of trust, if what I read is correct. I But I will not adopt this one: I know he has owners and that he's not a stray cat. I saw him once by the door of a nearby home. An evening when the cat was in the communal garden, I knocked at the door of these neighbours and asked if he was their cat. They confirmed it was theirs. And that he was a boy. I didn't ask what was his name. Maybe I should have had. I guess I will need to give him one.
Posted by Guillaume at 23:07

It's nice that there's a new cat in your garden, even if he belongs to someone else! My cat HRH was a tuxedo cat too. They're very handsome!

i think you need a new cat!

ALways good to have a cat around, and a cuddly one at that :)