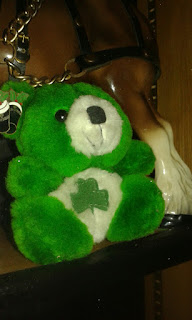 You remember that I blogged about this plush toy before. It is a lovely looking teddy bear with a shamrock on his tummy that is one of the decorations and emblematic elements of the local Irish pub. i wanted to mention him again to correct a mistake I made in my first post. And also because he looks really cool. Anyway, I thought at first that he was a Care Bear, to be more precise Good Luck Bear. And, while I loved the bear, I have to confess I don't care one bit about the sickeningly sweet Care Bears. But then my brother PJ made a very accute remark in a comment: the shamrock does not have four leafs, unlike Good Luck Bear's. There are other differences, important ones, which I then noticed. Care Bears had a lot of heart shaped elements in their design: their paws, their nose and, in Good Luck Bear's case, the (four) leafs of his shamrock. This is obviously not the case here. In fact, a quick look at the Care Bear on Amazon makes you realize that the design of the bear of the Irish pub is far simpler. So this bear is either an imitation, as my brother thinks, or his resemblance to the 80s brand of plush toys and cartoon is merely coincidental.

Either way, I am very glad, because as I said I don't care about Care Bears. And imitation or coincidence, this means that this bear stand on his own, does not belong to a stupid brand which had no place in an Irish pub. Can you imagine a Care Bear drinking alcohol? Or even condoning the consumption of alcohol? Which is ironic, because some bears have been known to be drinkers. No, this bear is now truly Irish (wherever he was made). He is green and white, he has a shamrock on his tummy, he truly belongs to this pub. And I am sure he brings the luck of the Irish far better than the other one. All he needs now is a name. I might baptize him Shamrock.
Posted by Guillaume at 13:23

I agree, much more character this fella has,, he is a great pub bear,,

The right bear in the right place.