Keep the ban on fox hunting! 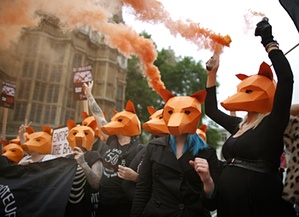 As people living here in the UK know, there will soon be a Parliamentary vote to relax the ban on fox hunting. You know with the title of this post where I stand on this issue: fox hunting is a cruel, barbaric, backward pseudo-sport enjoyed by cruel, barbaric, backward people who hide their uncivilized, crass, vulgar nature behind family wealth and often titles. Like Prince Charles, a prime example of the rich and thick, who threatened to leave the country if the ban was maintained. Please do, Charles! Foxes are part of British wildlife and far more useful to its ecosystem than that parasitic, inbred family of yours. In any case, they are not for your sadistic enjoyment, or your dogs. You little, little man. And Mr Cameron, you are a coward by pandering to those brainless, bloodthirsty idiots.

And don't get me wrong: I am not against hunting per se. I am a meat eater. But I find it pointless to hunt for something you would not eat. It is also cruel and unfair to the animal to go after him riding horses and with hounds to shred the prey to pieces. A prey that as I said has its place in the ecosystem and one of the most beautiful animals of Great Britain. And let's not forget that it is British wildlife that makes this island great in the first place. And the British love of their animals, domestic or wild, is one of their most admirable traits as a people. I felt very proud of my adopted country and its people when I saw these citizens wearing fox masks protesting against fox hunting by the Parliament. One of the most passionate and moving plea for keeping the ban comes from Chris Packham (of Springwatch/Autumnwatch fame) which you can find on YouTube here. I admit I borrowed a lot from him to write this post. Tell it like it is Chris!
Posted by Guillaume at 20:43

i used to fox hunt but never with real foxes. we did chubbing which is putting fox urine on a rag and sending ahead of the pack. a lead horse can drag it on a rope. nothing was harmed or killed and it was still great fun.

I agree. I'm a fan of Cameron but goodness knows why he's letting his hunting chums take this so far. The ban was and is correct and should stay.

I love foxes and the way they are hunted is trully barbaric. I hope that the ban remains in place!