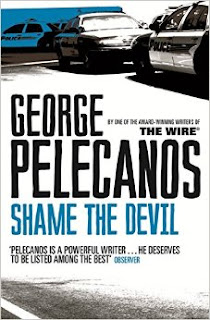 "The car rolled north on Wisconsin beneath a blazing white sun. The men inside wore long-sleeved shirts, tails out. Their shirtfronts were spotted with sweat and their backs were slick with it. The black vinyl on which they sat was hot to the touch. From the passenger seat, Frank Farrow studied the street. The sidewalks were empty. Foreign-made automobiles moved along quietly, their occupants cool and cocooned. Heat mirages shimmered up off asphalt. The city was narcotized - it was that kind of summer day."

As people following this blog know, I am a seasonal reader: I read certain books according to seasons as much as possible. I read crime fiction all the time, every time of the year. But there is something about reading a crime book during summertime, especially when the story is set during summertime, even more so when the weather matches the one in the book. It is the case right now. Well, I should say it was. I read the first chapter of Shame the Devil, which is set in July 1995, on a hot summer day. Then the action moves to January 1998. But hey, no matter, it is a great crime novel (can Pelecanos write anything lesser than great?) and the beginning shows summer in such a sinister, ominous glory, I had to share it on this blog.
Posted by Guillaume at 22:30