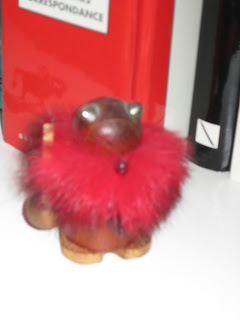 This picture was taken in my last trip to Québec. I took it, wondering where and how I would use it here on this blog. The pic is a bit blurry. I bought this Viking (or rather my parents bought it for me) in Denmark, back in 1989. It was the first of my second trip in a Scandinavian country. I am writing about this as my brother is now in Norway. It reminds me of my time in Scandinavian countries. I remember more my second visit, in Sweden. For a year, we have had a Swedish foreign exchange student who came to live with us. We got along well and call her our sister. A year later, in August 1994, we visited her and her family.

I remember a lot of things, fragments that make a blurry yet colourful picture. The almost prohibitive laws regarding alcohol consumption: a waiter refused to serve me a beer even though I was with my parents. The pathetic attempts I made at speaking English  whenever I could (I got a beer for free because of this, they couldn't make me understand that I had to pay). The family cottage near the Baltic sea, where it was cool even though it was summertime. The dip in the Baltic sea, which was so very cold. My Swedish sister took a picture of my distorted face as I had gone down to the waistline in the water. Sadly I never received a copy of it. The reindeer stew. The fermented fish, which I couldn't dare to eat (I should have tried), the smell making me feel ill. The fjords, more magnificent than my own. The medieval festival in Visby. The midnight sun, still up in August.The midnight sun especially, actually. If I have to sum it up to one thing, it is maybe the midnight sun.
Posted by Guillaume at 23:16