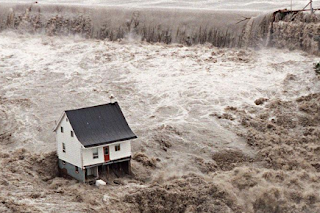 I mentioned it not long ago, I blogged about it already this evening. Today is the 16th anniversary of the Saguenay Flood. it made my region's history like 9/11 made this century, it was the event of my generation in my home. It has been on my mind a lot today, so I decided to blog about it. Twice instead of one. For a dispassionate account, please check this link. You can also see some dramatic images on YouTube.

First things first, a disclaimer: I did not lose my home, no loved one died. I saw the flood mostly through the television screen and mostly dry. The day before, I had gone back from the video club absolutely soaked, my mum and I had a good laugh about it. It hadn't stop pouring outside. I was considering going out that night, but because it couldn't stop raining I had decided against it. The next morning, we had learned that the water had gone over the dams. And we saw on the television images like the one I uploaded here. Familiar places that were drowned, houses that were carried away by landslide and dirty water, streams and small rivers turning into furious torrents. I was lucky enough: Chicoutimi was built on steep hills and valleys, the family house was on top of a hill. So we remained safe. We didn't have running water for a bit, we didn't have drinkable water for longer (in theater it is called a dramatic irony), but overall we were okay.

We learned only later how close we were to an even worse disaster. Our neighbour was a fireman and worked non stop over that period of time. He told us later that the water purification plant could have been taken away by the flood. Had it happened, the whole city would have been evacuated, if not the whole region. It was a traumatic event for all of us. I had spent my whole childhood and teenage in Chicoutimi, I had never left it to live somewhere else yet, I was pretty much a home boy, a Blueberry through and through. The next autumn, I was going for the first time to live in Montreal, to start my first year at university. For the first time I was going to be an expatriate. I never felt so much of a guy from Saguenay that first year in Montreal: my accent was giving me away, then people were asking me about the Flood.

I gave a nickname to the event: "our share of Apocalypse". I guess I was feeling poetic. I thought it would make for a great title for a novel. For now, it will be good enough for a blog post.
Posted by Guillaume at 21:11

omg...i have to tell the blog tech about this! he is the biggest lovecraft fan ever! he has read every single book ten times and has them all memorized. you should talk to him! we also have the entire original set of the equinox!

That house surrounded by all that water is breathtaking. I am sure that so many years on the event still provides painful reminders to those who lost their homes or loved ones.