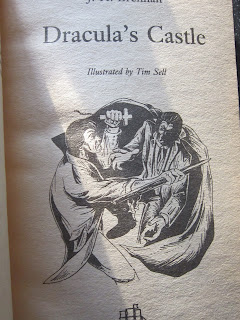 I often say the images uploaded on my blog show the colours of the seasons. Well, not always, as you can see here. This is something I would usually upload in autumn, when Halloween is coming. But I have been reading/playing on and off Dracula's Castle where this image is taken from and sometimes one's mind wanders around. And Halloween is only about three months away. As a child, we used to play "horror" make belief games throughout summer and not only on rainy days. I had not even read Dracula that I was already fascinated by the character. I do remember playing a few Dracula games before "the" Dracula game, but it is very vague in my mind.

I find this drawing interesting in many aspects. I do not know who Dracula is fighting. It could be either Jonathan Harker, who is the "good guy" character played in the gamebook or Abraham Van Helsing, who is the main adversary if the reader decides to play the Count. Van Helsing in the novel is elderly, but in the gamebook he is younger (40s? 50s) and nastier. The odds seem to be even here: the man is heavily armed and has a strong enough built. Of course, Dracula has superhuman strenght, but he might be weakened by the presence of the cross (although the man holds it in a strange way) and the stake is dangerously close to the Count's chest. It reminds me a lot of the climatic combats in the old Hammer movies, especially the one between Peter Cushing (Van Helsing) and Christopher Lee (Dracula) at the end of Horror of Dracula. Tense, dynamic, uncertain, vicious. I wouldn't mind watching some Hammer movies actually.
Posted by Guillaume at 22:15

It's a great picture. What really fascinates me is that vampires have never disappeared from popular culture. The resurgance in teen vampires in the last few years, as silly as some of them are, shows that. I wonder what makes Dracula and his ilk appeal so to our imaginations? We are just the food after all, us mere mortals who watch the films, or read the books:-)

Love the illustrations. The Dracula character has been a favorite of mine from childhood, and I really think it's time for a resurgence of the truly evil vampire character. The wimpy, lovestruck vamps of modern lore lack the...ummm...bite of the Count!

@Anonymous-I think the vampire is such an enduring character in fiction because it allows us to reveal a number of taboos and axieties about human nature. In Dracula, you have a novel about Victorian women's sexuality, about class struggles, about modernity, you have a bit of homosexual predatorism, a story about religion in an increasingly materialistic age, you have elements of Faustian myths, etc.
@The Gill-Man-We need new utterly evil vampires. And we need a faithful adaptation of the novel!