Hail to the King! 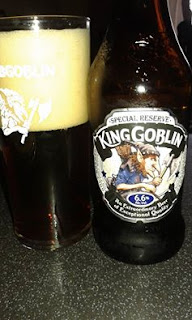 This was yesterday evening's poison. As my readers know, the products of Wychwood Brewery, as well as their imagery (based on creatures and characters of folklore), are among my favorite of all the microbreweries I have known. I usually drink the Hobgoblin, because it is their flag beer and because it is the most readily available, but the others are great too. And yesterday, I tried for the first time King Goblin. It is a rarity among their beers, because it is only brewed on a full moon. I had wanted to try it for ages, so when I saw it in a supermarket yesterday, I jumped on the occasion. It is a much darker ale than I usually have, and with a far higher alcoholic content: 6.6%. I rarely go above 5%. When I was a teenager it was different: I was all about drinking strong beers. Anyway, King Goblin is definitely a king among beers: strong, full of character and rich taste, it's a real treat. An ale you do not drink to quench thirst, but to savour like a fine wine.
Posted by Guillaume at 13:09

Only brewed on a full moon, eh? I can see why that would cut production.

I don't think I've had this one, but I usually like the really strong kind of sweet ones.