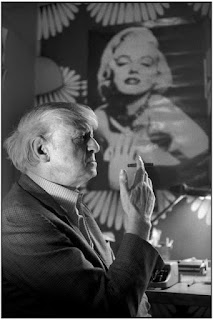 I found this picture on the Facebook page of the Anthony Burgess Foundation. It dates back from 1985 and was taken in  his study in Monaco. I never knew my favourite writer had much if any interest in Marilyn Monroe. I remember her being mentioned a few of his writings, but never thought the icon interested her to the point of having a picture of her in his study. And given his writing, I understood he liked more Mediterranean types of beauty (such as Sophia Loren). Now I find this picture fascinating for many reasons, what with the cigar smoking, the purely intellectual and unglamorous look of the writer contrasting with the sensuality of the Hollywood star facing him, but there is something else: I had the same poster of Marilyn Monroe when I was a teenager. For some reason, I was a big fan of her. Now she is no longer my favourite actress (somebody else is), in fact Monroe is first and foremost a star of legendary stature. All the same, I find it borderline spooky that Anthony Burgess and I shared the very same image of her.
Posted by Guillaume at 23:24

Nooooooo! Anthony Burgess was brilliant, witty, cultured, educated, he was nothing like Donald Trump. He had a terrible haircut, but he had none of Trump's vulgarity.