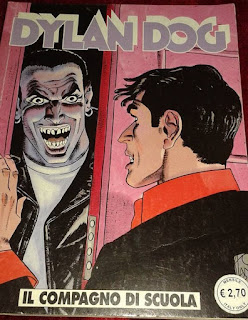 The treasures you find in second-hand bookshops, even Oxfam! (And I know I have been praising Oxfam a lot recently). Well, in any case, I found last week that Oxfam was selling a few Dylan Dog magazines, in original Italian, at the very cheap price of £0.99. Less than a quid, a pure bargain. I had never read a Dylan Dog before, but I have read about Dylan Dog, the first time in a dictionary or an encyclopedia of comic books as a teenager, and since then had always been curious about this fumetto. Back during my month in Italy, I had considered buying one or two to improve my Italian, but had decided against it because... Because I thought it might be a waste of money if I could not understand a thing. I always regretted it.

So when I saw them in Oxfam, I considered it a sign of fate and I decided to purchase one. At less than a pound, it was hardly money thrown down the drain. And... And I was happily surprised to discover that I could understand what I was reading. Granted, not everything and not the foreword, but even without the help of a dictionary at hand, I could get the gist of it. I am so glad my Italian is not as bad as I thought. And I fell over the charm of this odd comic book, set in modern day Britain, but harking to old fashioned Gothic horror and with Italian witticism and baroque imagery. Not to mention, in the case of the book I bought, the language. You have English character speaking Italian all the way. It's so bizarre, yet it works. I bought only one, but I regret not buying more. Because of course the week after when I stopped there there was no Dylan Dog anymore. They were already all gone. Who else is into it, in its original language, in the little English town where I live? I hope they are going to sell more, so I can start a collection and improve my Italian. And I also intend to add the fumetto to my collection of Halloween reads.
Posted by Guillaume at 21:46