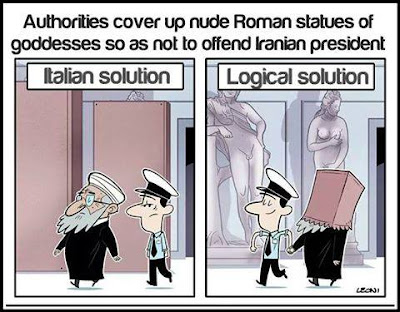 I might be a bit late covering the news, but I found this caricature about the recent  controversy regarding the president's of Iran's visit to Italy, where nude statues were covered so as not to offend him. I love Italy, but sometimes find this country infuriating, especially when it panders to religious puritanism. This is not only a stupid gesture, it is a cowardly one. So when I saw this caricature by Walter Leoni, I did not only laugh, I roared, with a good dash of anger. Italy can be infuriating, but so many Italians remain admirable in their criticism and mockery of stupidity.
Posted by Guillaume at 21:46