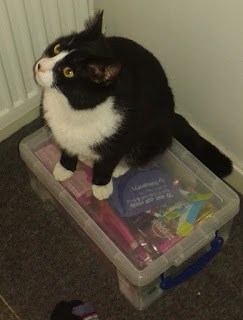 My wife recently discovered a few things about our resident cat Domino. She spoke with an old lady who lives on ground floor and her son. She has limited mobility and sometimes needs a wheelchair. We knew she was sometimes letting Domino in and spending the afternoon with her, we had pondered to talk to her for a while, but were hesitant as we didn't want to be perceived as catnappers. On the contrary, she was really glad we are looking after him. She calls him Pussyfat and I hope it is not since we started feeding him. Apparently, he does not eat much with her. He is also called Smudge by her helper's children. He also loves hunting birds in the garden. Apparently, he once came to her flat covered with blood from one of his preys. This comes as no surprise to us. Domino just looks and acts like a hunter. Anyway, he seems to be doing little else at her place than sleep, which is exactly what he does here, apart from eating or asking for food. Which he does in no uncertain way, as you can see on this picture. It makes me wonder if he doesn't see us merely as conveniences.
Posted by Guillaume at 21:48

that is a very smart cat lol,, I wonder how many others he has that he visits,, maybe he is the community cat visitor!
I suppose cats think with their stomach first and a little loving on the side is just a bonus!

Don't worry, cats see EVERYONE as mere conveniences! Another reason we love them so, the narcissistic little psychopaths.

smart cat! i miss not having cats.

Cats are such independent creatures!