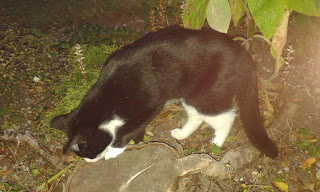 This household recently lived a drama that could easily have ended tragically. it took me a while to blog about it, so stressful and shocking was the event. Anyway, here it is. Last Sunday afternoon, we were planning to go out to a recycling centre to get rid of the remains of the Christmas tree. Domino, the cat we have finally adopted, was out, as he likes to spend his afternoons outside. My wife wanted to bring him in. As he was sitting carefree in the block's parking, one of the neighbours drove in. Slowly enough, but I wanted to make sure that Domino was not going to be run over, so I chase my feline friend away while gesturing to the man not to move his car further. Domino went back to the garden and safety, looking at me quizzically and with a hint of fear. My cat can get quite anxious sometimes, I don't know exactly why. In any case, he didn't like my vehement gesturing. The neighbour got out of the car, smiled stupidly, we exchanged some banalities and while he opened the door of the block, Domino tried to move in. And that stupid neighbour, instead of letting me handling it, as I asked, tried to cease Domino by the neck. That sent my cat in a frenzy: he rushed our the moment I opened the door and would not let me get closer. Domino was looking at me as if I had betrayed him. He crossed the street (which he never does anymore) and hid in the shrubbery of the neighbouring gardens. This lasted a few minutes, until he tried to cross again. Alas, there was then a good bit of traffic o the road and... He got hit by a car. 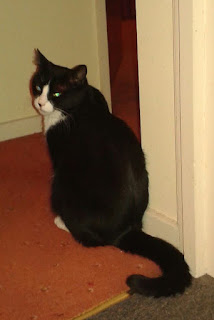 I was not sure about it at first, as he ran off again, panicked but very much alert. Wild even. But the woman who was driving the car and had stopped said she had definitely hit him. So we tried to find our cat. We finally saw him in the back garden of his former owners (who were away), where he hid behind a plastic cabinet/shed, which we couldn't move. I was raising hell on the phone with the vets, the RSPCA, the fire department, what have you. Domino had run away in the meantime and we could not find him. We spend the whole afternoon and evening looking for him. I was going to check one last time to check in the garden, losing hope, when I saw him at the door of the old lady who sometimes lets him in. Domino did not run away this time, but walked to me, obviously shocked. We managed to bring him to the vet emergency, when we were relieved to learn that there was no serious injury. There was some nasty cuts on his left side, particularly one above his eye, but nothing serious. So he is now recovering from the ordeal. He has not been out yet and for some reason he does get scared of me from time to time. But he is better. After Odin's tragic death back in 2013, we were afraid to relive this tragedy, from the same mistakes. This was not to be. And I end this post with a picture of our recovering tough little warrior. Domino is truly a cat of nine lives. And I am so ever grateful for his resilience.
Posted by Guillaume at 21:33

I am so very glad to hear that Domino has no lasting injuries from his encounter with the car! Give that cat some extra love for me!

What a terrible experience! I can see why it was upsetting to you and all concerned. I'm so glad Domino did not receive any bad injuries!