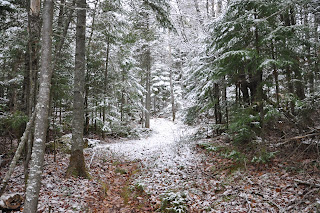 This picture was taken in... October actually, on the 30th of october 2010. I uploaded it here from Dropbox because it fits this post very well. It looks like a November snow, an "early snow" (maybe not so early if it is in November) that announces winter. It has been getting colder and colder these days, the temperature has finally started feeling like November. And I have heard and read that it might snow tomorrow and during the weekend. I am careful about what I wish for, as the English don't deal with snow very well, but I would love to see and feel some snow.

Winter in general and November in particular look less gloomy when there is snow. The season does not feel dead with snow. It can look asleep, but not dead. In the woods like you see on the picture, snow is magical. When I walk outside, I can smell the snow in the air, the cold temperature makes you feel like it is going to snow any moment. The only thing missing is the snow itself.
Posted by Guillaume at 20:27

Being from Saguenay/Lac-St-Jean, snow is in your very soul, I know.