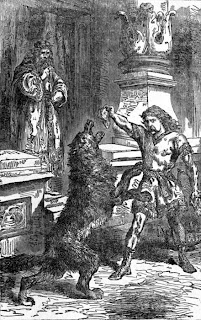 Today was, well, duh, Tuesday. I blogged last Wednesday about the meaning of Wednesday, which means Wotan's Day. Well, Tuesday means Tyr's Day, the day of the god Tyr in Viking mythology. In french it is "mardi", the Day of Mars, who is the same god for the Roman, only with a different name and from a different culture. You can see the god Tyr on the image the left-side of this post, made by an unknown illustrator. It represents Tyr feeding the wolf Fenrir, who was going to become a giant wolf, under the worried eyes of Odin. Later on, when Fenrir was at full size and a danger to manking and the gods, Tyr had to sacrifice his right hand to the ravenous mouth of the wolf so the gods could bound the monster.

Long story short, when I first read Viking mythology I liked Tyr a lot as a god, maybe because of this sacrifice. He showed much more courage than his Roman counterpart and I find him much more admirable than the better known Thor. Being willingly maimed to avoid a greater evil. Brave and selfless. Vikings are often pictured as bloodthirsty Barbarians, but the stories of their legends, such as this one, show a much more subtle culture, where violence is used with measure, where savagery and cruelty are seen as a threat to society. I love Viking mythology, which I associate with Christmas. I guess this is why I am blogging about it more often these days. You might see more of Viking-related posts in the upcoming weeks. So today was Tyr's Day.
Posted by Guillaume at 21:25

Interesting! I didn't know much about Tyr before -- thanks!

Tyr is definitely a lesser-known god from the Norse pantheon. A really great character that has all sorts of potential for stories. I wonder why he hasn't been explored more in fiction like some of the other mythological gods & demigods have?

LOVE this picture, by the way!

@Debra-You are welcomed!
@The Gill-Man-I think he was not more explored maybe because he was a quieter character than say Thor. And Odin was the king of gods, so he also played a more important role in the legends, especially with his interaction with men. But I see in Tyr the possible ancestor of all cold, silent type heroes, such as say Batman.