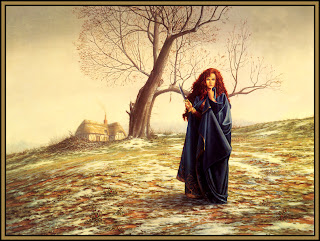 Well... Not really. I am the first one to find it sad, but this post title has nothing to do with the current weather here. November has gone from cold to warm to cold, but never cold enough to have snow. There was fog, which was lovely, but no snow. Not yet. This is something I would love to see falling, it would give the place a nice feel.

When it snows in November, it usually looks like the picture on the right. This is what the post was referring to. Its title is, fittingly enough, Early Snow. It was drawn by Larry Elmore, who draw many Dungeons and Dragons pictures, among my favourite. This is one of them. It is simple, full of atmosphere. We have this solitary woman staring at us, a dagger in the hand. The surroundings are bare, she seems to live in a seemingly comfortable yet modest cottage (I mean it's not a castle), yet the clothes she is wearing belong more to a lady than a farm girl, with the rich colours and the fine embroideries. From a player's experience, I can safely assume she is a priestess of some sort or a magic user. Or a magical creature herself. She is a redhead, which traditionally indicates some tights with the supernatural... and a fiery temper. We don't know if she is holding the dagger to defend herself against potential hostile visitors or if she is a going to attack the newcomers out of pure malevolence. And the almost bare landscape, the tree in the background, which leafs are scattered around, underneath the thin snow, everything gives an impression of restrained menace.
Posted by Guillaume at 18:56