A house in Arvida and childhood memories 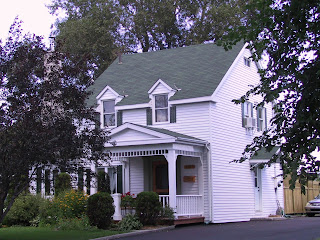 I have no idea when this picture was taken. It was send to me by my dad, among others pictures from various. This is my grandmother's house, on my mother's side, in Arvida. It is how it looks now, so it is different than in my memory (which may be faulty). We spent many, many weekends and family celebrations there, when I was a child. I felt a rush of nostalgia looking at it.

This house was in our make-believe games a haunted house, a hotel resort full of spies (there was a gigantic, old broken radio that was supposed to be our radio-emitter), a manor, a badguy's headquarter, a medieval castle, etc. There was a "secret passage" with a "secret door" in the basement, basically a small space pass the boiler underneath the staircase leading to the basement, where my grandmother was putting the soft drinks (often local brands), chocolates and chips (Yum Yum). This secret passage became a secret passage in a haunted house, or the entrance of a cave, and so on. Since my cousin published his book on Arvida and since I read it, I revisit the place in my memory. Make-believe games (such as this one) were an important part of my childhood, so I associate the places with them. Of this house, I also remember the garage full of ice hockey trophies my grandfather won and the old typewriter in the basement. And many board games we never played. So I thought I would blog about it tonight. It's also an excuse to upload the picture of a lovely house.
Posted by Guillaume at 21:24

This looks like what I imagine to be a dream home, it's so lovely! It looks like the perfect house for secret passages and alluring doors.

It is so lovely. A child's dream play house. I can see why you have such lovely memories of it...and thank you for sharing them with us:-)