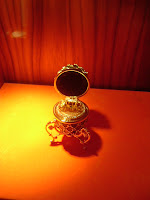 I checked on Google today, and because of today's doodle I discovered that it was the anniversary of Fabergé, the creator of the Fabergé eggs. This is not an original Fabergé egg, obviously. It is a copy of a copy: it represents the Fabergé egg in Octopussy. It was taken in the james Bond Museum in Keswick, which I think no longer exists. It was not a very good one anyway. All I know of Fabergé eggs, which is nothing, I know from the movie or The Property of a Lady, which is the short story the James Bond movie was freely based on. I never had much interest in jewellery, except as a MacGuffin for stories (they were heavily used in crime fiction of course, but in other genres too). When I learned about the birthday of Peter Carl Fabergé, all I could think of was Octopussy (I guess I was not the only one). I actually enjoyed the movie a lot, in spite of its flaws. Today, I thought I could watch it some time soon.
Posted by Guillaume at 20:05