My (or your) favourite spot in (insert city here) 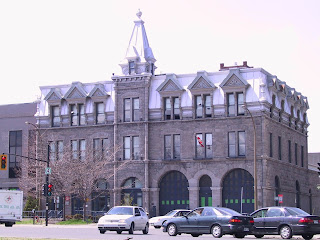 Earlier on, I was watching a YouTube video with George Pelecanos, where he mentions his favourite spot in Washington, DC. It made me wonder about the cities and towns I lived in, or that I visited, and if there was a favourite spot of mine in each one of them. I am a man strongly attached to places, and I discovered I never really thought about it: what are my favourite spots. So here is my reflection about it. I decided to narrow myself to the places where I lived, not the places I visited.

The trickiest one is Montreal. This picture you see on your right was taken in Montreal, it is a fire station, you can find it at the corner of Rachel Street and Christophe-Colomb Avenue. Not exactly my favourite spot, but it ison the Plateau Mont-Royal, where I used to live. Mont-Royal Avenue and Rachel Street were maybe the places I was spending most of my free time, where I used to go out for a drink or a meal. I guess Rachel is a nicer looking street, on the whole, quieter too, and it is nearby the Parc Lafontaine, which is quite nice. But Mont-Royal Avenue has this vibe, the fruits shops, St-Viateur Bagel Café and the second hand bookshops. But I'd have no idea which specific spot on the avenue I prefer. That is my problem with Montreal, I love too many places, I have favourite lines, favourite paths, favourite journey routes, but not really favourite spots. So I settle for now for with Rachel Street and Christophe-Colomb Avenue. It is as good as any.

Now for the city where I grew up, Chicoutimi, "ugly as any American town" it is easy: my favourite spot is the entrance of the Cégep de Chicoutimi that used to be the entrance building of the Séminaire (a private Catholic school). The cégep itself is ugly, except for this part of the building, which is a nice, old thing with large doors and pseudo-classic columns. It had a Latin motto meaning "The Hope of the Messiah in the seed", which was translated by the pupils of my father's generation by "The space of a month in a week". But what is really lovely is that it is at the top of a hill. Chicoutimi is full of hills and steep slopes. And this hill towers the whole city, its center town and the Saguenay river. It is even above the Chicoutimi cathedral. During daytime, it is beautiful. At night, it is amazing.

Now for Liverpool, the last city I will mention here, it is also a tricky one. Like for Montreal, it is a line I prefer: the journey from Lime Street Station to the campus of the University of Liverpool, the upper slope that, not quite as sharp as the ones in Chicoutimi, but still, where on my way I could see the Catholic and Church of England cathedrals facong each others. I guess if I had to choose a specific spot, I would have to choose the exit from Lime Street Station. Lime Street Station itself is ugly, heck maybe Liverpool is mostly ugly, but the feel you have when you see the city from the station, going out of it, it is just overwhelming.

But anyway, what's your favourite spot where you live, or lived?
Posted by Guillaume at 23:13

I lived on Cristophe Colomb close to Rachel for a while :)

In Montreal I like Griffin town and the Mc Gill Ghetto.

In Paris, I don't really have a favourite spot, I guess anywhere where there aren't too many tourists.

By the way, I liked Liverpool :)