Sinister mills and a haunting story 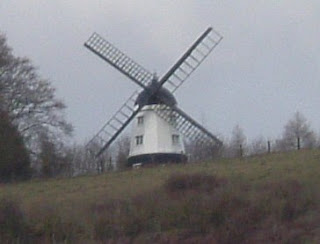 Is it me, or do mills in general, windmills or watermills, look sinister? Not that I would mistake windmills for giants or anything, but there is something vaguely ghostly in their appearance, big spectral things standing in an often desolated environment, still or creaking like an haunted house.

Maybe I have this impression about mills because of Krabat/The Satanic Mill, a story by German writer Ottfried Prussler which I have already blogged about in French. It was about a teenager living in poverty as a vagrant, who got hired as an apprentice in a watermill, (after listening to the calls of ravens), only to discover afterwards that the miller is indeed a warlock who kills his most experienced apprentice once a year in a duel to keep his powers. It is a very dark story, but an idealistic one: love vanquishes evil and redeems those who have fallen, power corrupts, but one can escape from its temptations and so on.

They made a movie adaptation recently, which I really want to see. I know Krabat not from the original novel, but from another, much older, animated adaptation by Czech director Karel Zeman, called in French L'Apprenti sorcier and in English Krabat, The Sorcerer's Apprentice, according to imdb. It showed once on a Saturday afternoon when I was a child. I can't believe they were showing such program in the afternoon. Not only because it was violent, many cartoons were at that time, but because when it was violent, it was bloody and even had murders. It also had a dreamlike aesthetic that often took the colours of nightmare. The images were lush and beautiful, but always scary. For the curious, you can find the movie here, in German with English subtitles. When I re-watched it eagerly last Autumn, I was again mesmerised by it. I strongly recommend that you watch it. Krabat is both sweet and terrifying, a rare quality that gives rare pleasures.
Posted by Guillaume at 13:44