I am writing this as an afterthought to this post and maybe you will find contradictory what you are about to read. To illustrate the comment I am going to make, I just 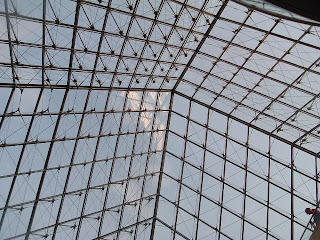 thought I would put first this picture of the glass pyramid inside the Louvre museum. It illustrates the counter-argument, or at least counterpoint of what I was saying then. Indeed, new constructions, and definitely modern looking ones, can stand with new ones in perfect harmony and almost if the old had been made to mix with the new.

Back in another life, I used to teach French around Montreal in various businesses. Some companies were based in old factories, warehouses and what have you, and were mixing elements of old architecture and new things build on it. It was often strange to see the marriage of ultra modern offices and old buildings, but somehow it often worked. I don't know how people who were working there from 9 to 5 were feeling about these places, but it did make my job more enjoyable.
Posted by Guillaume at 22:06

Guillaume - once again I agree with you! Our home is, in fact, like this - we have a mixture of antiques and very modern pieces & it works (WE think, anyway!) Also in the town we live in - there are some quite 'way out' modern buildings and they sit very happily alongside the 2-300 year old...or even older ones. It's quality of design, I think, that's most important....from whichever age or time! xox Rachel