The charm of old churches 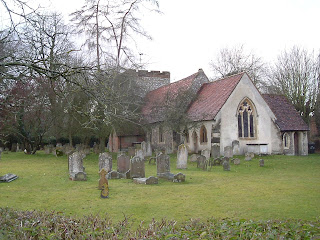 As I mentioned before, we went to a typical English village last week, and I now have enough pictures to fill the blog for quite a while.

So anyway, there was an old church in this nice little English village. I am not a religious man at all, quite the opposite as you know, but I always found old churches full of charm. Furthermore, as a medievalist I have an academic interest in them. I suspected this one was quite old, but since history of architecture is not my specialty I could not evaluate the time period when it was built. I asked at the local pub, just in case, but of course they had no clue. It appears, after researching the Internet, that the foundation dates back to the XIIth century. Just the time period when I am specialised in. Like many other ancient churches it was rebuilt later on, but it still retains some of its medieval look. Looking at a place like this, one almost feels the past centuries as if they were here and now.

I don't want to repeat what I said in the first post about this village, but looking at it, I felt a bit like a M.R. James story or a Dungeons & Dragons game, or a Ha... well, you must know about that one too. I repeat myself, but I guess that is to be expected after blogging for three years now. Even old cemeteries don't look so sinister. Or, if they do, they remain deeply atmospheric. Which is all they need to be. I got married in an old church, a XIIIth century one looking a bit like this one. I might blog about it one day, until then, you have this picture of a piece of ancient time.
Posted by Guillaume at 19:58

I beg to differ.....I think you are indeed a religious person or, at least, very knowledgeable and questioning about religion, be it what it may.

@PJ-Les cathédrales sont trop solennelles, je le crois aussi. Mais il y en a des superbes.
@Anonymous-Believe me, I am not religious. I don't believe in God, for once, and I would be in a church only for necessity (say I am invited to a wedding) or for aesthetic reasons. My appreciation of the buildings is purely materialistic, or at least secular.