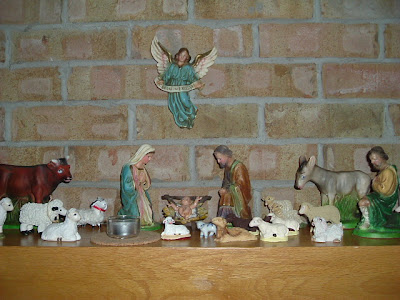 I think it would be appropriate to have a post with a (somewhat) religious topic, as it is Christmas Eve. In my family, we are not religious people and I am leaning on atheism more often than none, but since our culture is still deeply rooted in Catholicism (for better or for worse, we cannot realy divorce from it), we put up a Nativity Scene every Christmas. It is a beautiful thing, a work of art really, with 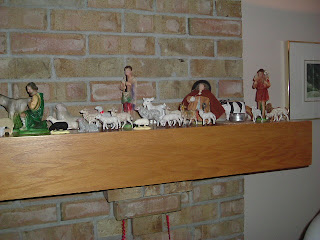 the Holy Family, shepperds, sheep, the three Wise Men who came at Epiphany, an angel, all with expressive faces, showing deep emotions for such a solemn event. This is what makes it special: the characters are iconic, but they take dramatic stances and show genuine emotions. Even the animals seem to feel the Nativity and its importance, seem to be penetrated by the event. It made me believe for years in the story that was told. My father bought the Nativity Scene years ago through a priest friend (yes, we had some at the time, this one baptised me), who imported it from Italy. That was a lot of trouble at the time, but it was worth it as we wouldn't have plastic models made in Taiwan or wherever. What we got was much better. Over the years, we have completed the Nativity Scene with various sheep figures bought all around the world (but many are santons de Charlevoix), so we have many, ma 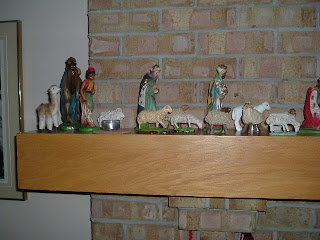 ny sheep (and a few goats and other farm animals), in fact a complete menagerie. As it was very fragile, my father placed the scene on the mantelpiece far from the reach of his children. It is now its place and we put it there every Christmas. On Christmas night, when the fire is burning and the Nativity Scene is lit by small candles, it still has all the dramatic and emotional impact I felt years ago. The birth of Jesus is being lived, literally, over the mantelpiece.
Posted by Guillaume at 12:40

This is lovely. Thank you, and Merry Christmas to you and your family.

And a very Merry Christmas to you and your family.

It is always nice to see a creche - very calming.

I am glad you liked it. Merry Chjristmas to you too.

I won't be putting up any decorations or celebrating Christmas this year. It means nothing to me. Just a commerical excuse for excess and greed, people giving gifts rather than giving of themselves. Christmas pretty much sums up the modern human condition.