The witch in a modern setting? 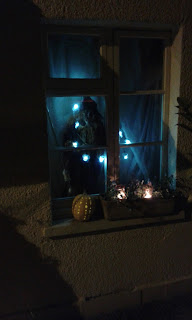 For tonight's countdown to Halloween post, I thought about asking my readers a question I have been asking myself recently: can you have witches in a modern setting for a horror story? I was wondering the same thing last year and the year before. Witches are a common stock character of Halloween, they are part of many Halloween displays (like the one you see at this window), yet they are confined to decorations, to the caricatures of the ugly old cackling witch or the sexy vixen (see this recent post). Vampires, werewolves, ghosts, they have all been modernized in one form or another in fiction, revamped so to speak. Witches, not so much. Maybe because the witch hunts of the past turned them into sympathetic characters. Yet I rediscovered them in fiction recently, and I think they have potential to be a true menace in a modern setting. This is what I wrote about them in 2015: "She is an poisoner, she is in league with the Devil, she shows no remorse to hurt young children and animals. If they are seen with cats, toads and other animals, let us not ignore their true nature: these are devils, familiar spirits, that have taken the shape of these beasts. The witch is the female, folkloric ancestor of the serial killer or the child abductor. Or simply the nosy, busybody neighbour, who can be quite malevolent herself." But the stories I have seen them as true evil all dated from at least a hundred years. They creep in modern fiction, but so far in my read they are generally sympathetic.

So tell me, did you read recently about evil witches in modern horror stories? What do you think of the witch as an archetype? Any idea how to use them in fiction?
Posted by Guillaume at 18:36

Yes they could be used in modern. Have a beautiful woman for example and have her cast evil spells. What is scarier than what you find perfect being evil? For the most part though I prefer to see them as the heroes of a story. Might be due to the fact that I consider myself a witch.

Hello ! I just discovered your blog and am enjoying the reads and your thoughts! I love this question as a writer and wanted to offer a few possible inspirations. The first in the current Autumn edition of Faerie Magazine which has quite bit about modern witches in it, though it focuses mostly on the positive. And then a comic called Black Magick that began about a year ago. It details a modern cop who is a member of a coven, again a "good witch", but who is fighting against some dark witch energy and magic along the way. :) Also a short essay by Alice Hoffman called "Sister Witch" about the way the costumes and ideal of witches at Halloween empowers young girls.

The positive can easily be turned upside down if you wish but they are sides of the same coin in all of us. And all the icons of witchcraft, black cats, mirrors, the woods, trees, besoms and brooms(straw into gold?) I think the lingering appeal to witch sis the natural aspects and the everyday. All truly good "dark frights" are found in the ordinary. The bump in the night, the thing under the bed. . . you don;t have to go too far to find the magic in it, light or dark. Happy to have found you!