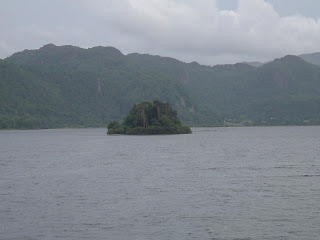 I might be milking the Odyssey's analogies a bit too often on this blog, but there you go. My recent trip felt like an odyssey, even though my wife and I travelled by train most of the time, with a few bus and boat trips here and there. It certainly felt like we were entering another world when we got into the Lake District.

The weather, for one, was radically different than what we have had so far here in the South. July in the Lake District often felt like a mild September day. Not that I complain about this: I was getting tired of the heat and was glad to be in cooler temperature. I am a Northerner everywhere I go: I feel comfortable in Northern weathers and felt that Cumbria was oddly familiar. The mountains, the large lakes, the forest, it is in a way quite similar to the Saguenay region in which I grew up. In another way, it is not so similar, as no town we visited was positively horrid. Civilisation espoused nature instead of spoiling it. Place for place, I would rather live up there than here, if my wife and I could both have similar jobs. It is not exactly my Ithaca, but it could be just as good.

My travel book was Treasure Island by Robert Louis Stevenson. I wish I had discovered this book earlier, when I was Jim Hawkins's age. Still, Stevenson is always enjoyable to read. I am still reading it, will probably finish it soon. People might think it was odd to read a sea adventure book for a journey that was done inland. Still, I thought it was appropriate for the trip, as it is the story of a sort of odyssey. Travelling novels (road novels?) are about the return as much as the journey, and the changes lived by the character through the process. I don't know if I changed much these last holidays, I still think I rediscovered things about myself.
Posted by Guillaume at 12:30