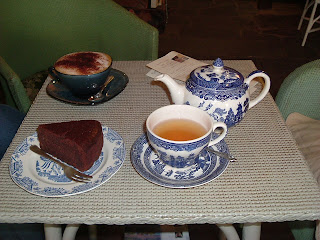 se, when we went to the Lake District I became quite fond of afternoon teas, which were often reversed into morning teas, which themselves completed or replaced breakfasts. I think I tried more tea during those holidays than local beers, which is quite a dramatic change. The Lake District seems to have more tearooms than any other place I have seen in England. It is as if this piece of land barely saw the world changing outside, in that aspect at least.

Tea was perfect for the kind of coolish, windy and often wet weather we had there. The picture here was taken in Temporary 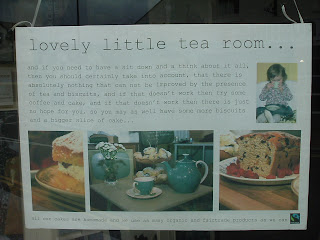 Measure's tea room in Keswick, shortly after breakfast. I had black tea with mud cake, maybe the best mud cake I ever had. We went to other tea rooms and had more proper afternoon teas, with fruit cakes, scones with cream and jam, a slice of cake and so on (and we actually had them in the afternoon!), but I think this was was favourite tea room. They served tea in Chinese porcelaine, which was absolutely charming, with the cake it was even better. And I simply loved the philosophy of the place, which you can see on the bottom right picture.
Posted by Guillaume at 10:24