A castle by the door 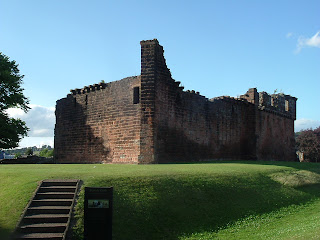 During our last trip in the Lake District, we barely saw the town of Penrith. We were practically passing by, waiting for the bus to Keswick and we did not see much of, but the little we saw was really worth it. Indeed, we saw its castle the moment we step out of the train station (which was partially constructed with stones from said castle). That was quite an impressive first contact with Cumbria and it made me regret a moment that we were just passing by. It changed when I saw the other towns and villages we visited and I quickly fo 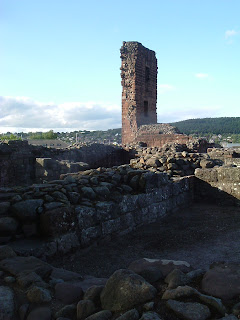 rgot about Penrith. However, since we had an hour or two to kill until we got the bus to Keswick, we decided to have a look at the castle. This is where I took those pictures.

I am a medievalist by education, so a medieval castle, wherever it is and in whichever state it is, always gets me excited like a child. And I am not specialised in medieval architecture, but nobody can stay indifferent towards these buildings. I used to see Windsor Castle from the outside every day, but that was different. There is something about old, ruined, uninhabited castles, those that have been hurt but have never moved with time like this one. They are deserted but for the odd tourist and local visitor, yet they are full of character and so atmospheric. From its history one can imagine all sorts of stories. It is a shame that ghosts most likely don't exist, because castles like this deserve to be haunted.

I envy the citizens of Penrith, especially the children who can grow up so clos 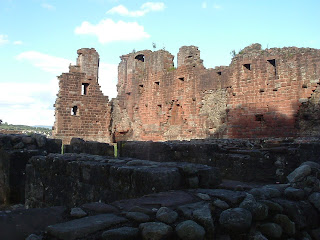 e to such a place, and can go around and play. They literally have a castle by the door. I said that I love castles because I am a medievalist. It is not quite true. I was from an early age fascinated by medieval time and by ghost stories. One of my babysitters, a real Mary Poppins (I mentioned her before), used to sing me the this song about a haunted medieval castle, one of the many things she did that gave me an appetite for fairy tales and ghost stories, and of course medieval time. I can remember me asking her "Claire, what's a medieval castle?" and her showing me in a dictionary a picture. My brothers and I used to play a haunted castle game based on this song especially when summer was not quite warm or sunny enough to feel like summer, like it is these days here. Well, I have pictures of a medieval castle here now, they can tell me if it looks as good as they imagined it.
Posted by Guillaume at 19:20

Hi Guillaume...
Sorry it has taken me so long to get over here, it is my birthday today and I was busy most of the weekend, so no blogging. But what a wonderful post and thank you so much for sharing those photos. I love castles JUST like this. The more decrepit the better. They have so much character and I wonder incessantly about what kind of things took place within it's walls so very long ago. I'd LOVE to see this in person. Castles are tops on my list when I make it to Europe. How lucky you and your wife are to have been able to go there. And I bet it does have ghosts...it just has to! :o)

@Wendy-Don't worry about that! I just thought you had missed that one and I thought it would interest you.