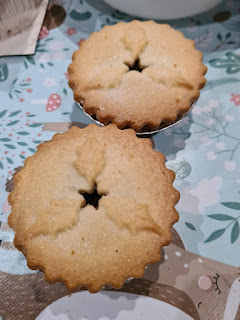 Today is my wife and my meeting anniversary. 19 years ago. As we met over a mince pie (more details in this post), I bought some mince pies from M&S. I always have them on that day, even though neither my wife nor I are big fans of mince pies. Yesterday, I was having one as a dessert and I tried to explain to Wolfie how his mummy and I met. I did not manage to keep his interest for very long about it, I think too many concepts needed to be explained (university life, friends of friends, a time when he did not exist). But he did enjoy the mince pies. Not only eating them, but playing with them. In fact, that was his great discovery yesterday. As I was telling the story of his parents meeting, he said: "Look daddy, I made mince pies cogs." And well, he did. Of course I had to take a picture. I love how his mind works.

They DO look like cogs! Kids are so observant!