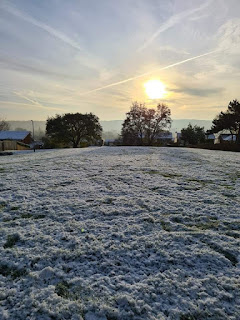 Well, I had heard snow was forecast, but I did not believe it, or at least I took it with a barrel of salt. But in the night of Sunday to Monday, it did snow, not much, but still, enough to cover some of the ground this morning. Doing the school run was hazardous, as there was black ice. But after leaving Wolfie at the gate, my wife and I stopped for a moment and I took a few pictures. This early, right before December, in this country, it is borderline sci-fi. I am starting to dream of a white Christmas. I know I should not, I will end up disappointed. But still. Winter is here.

we got a little bit too. not nearly enough for me.