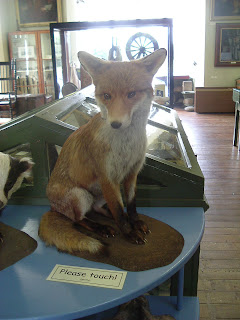 People might think I am of a one track mind these days, but there you go. According to this post on Autumnwatch's blog, the new season of Autumnwatch will start in early October. I can barely wait. I think it should start earlier, more like in mid-September, but this is much better than in 2007 when it started in November, way too late in the season. I have mentioned before how much I love this show. I am looking forward to it and find evenings a bit boring now.

The picture here was taken in the Keswick Museum. I love foxes, especially red foxes like this one. One of the first things I noticed about this country is the proximity of the foxes with human population, as I saw many foxes prowling the back garden of our university residences. I didn't complain. For me they are one of those animals that perfectly represent autumn. In this case, because of its fiery red colour. It was great that the museum encouraged us to touch the animal! Anyway, since the fox is often featured in Autumnwatch and because of its association with the season, I have decided to put it here.
Posted by Guillaume at 21:53

So I'm guessing that 'Autumnwatch' is a show in the UK then and not something here in the states since I've never heard of it before. You'll have to post on the show from time to time...sounds like something I might like. Is it specific to 'Autumn' or that is just a name?

Autumnwatch is a BBC program about animal wildlife in the United Kingdom during autumn. There is also Springwatch during springtime, but Autumnwatch is by far the best.