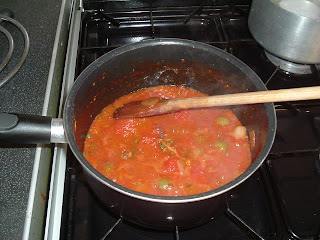 A week ago, I was alone here while my wife was away, so had to cook for myself. I don't really like being alone much, not only because I miss her but because I lost habit of cooking for one, but on the bright side it allows me to cook things she would not eat. So that's what I decided to do that night.

It might not be very original to say, but I love Italian cuisine, maybe more than any other. There is one particular type of pasta dish I like, it is alla puttanesca. I discovered it at Misto in Montreal, last August. There is everything in that sauce I like: capers, olives, a bit of chilli for the taste and a bit of fish for the protein intakes. I am usually not a big fan of tomato sauce, especially with pasta, but I love the mix of tomatoes and fish (a surprisingly successful marriage of flavours), and it works wonders in the recipe. It is usually a spaghetti dish, but we don't have spaghetti so I had it with fusilli instead. 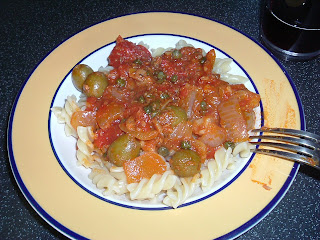 This was not the only change I had to make to cook it. We don't have anchovies, so instead I put in a tin of sardines. It was a great idea as I didn't know what to do with it. I also put harissa instead of chilli. And I am not sure if proper puttanesca has onions, but I put fried some anyway. But the rest was following the recipe with orthodoxy: loads of capers and as much as I could of olives (in other words what was left in the jar). You can see the result on the picture. I know, the bowl on the left looks messy, with the sauce on the side.

I mention following the recipe "with orthodoxy" in the previous paragraph, but I think the nature of the dish, and its appeal to me, is its improvised, messy, completely unorthodox recipe. I don't know if this is a urban legend or not, but it was supposed to have been invented by prostitutes. The Wikipedia entry also mentions another origin, much less romantic than the other one. The first theory is just seedy enough to remain mysterious without being tasteless (bad pun I know) and fits the dish's exotism.
Posted by Guillaume at 20:01

Hi Guillaume! This is my husband's default supper!! He puts whatever we have in, but always capers, onions & Chili. Sounds yum, will suggest the sardines next time! Thanks for visiting the Lake District with me. Hope the job's going well. We're at Idomineo on Friday night - will think of you! Love Rachel xo