The bats are back! 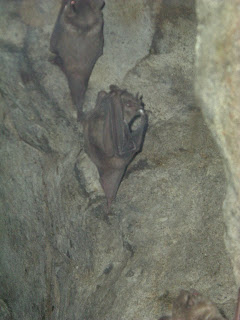 Well, maybe they never left, to be honest, but I hadn't seen them in a while, since yesterday that is. By seeing them, I mean of course getting a glimpse of their movement at sundown. They are elusive creatures, too fast when they fly for our camera, very small and barely perceptible. They are just shadows.

There was Batman Begins on television that night, fittingly enough, so I thought I would blog a bit about our nocturnal neighbours. It is also an excuse to put here those pictures of fruit bats, taken at the Vancouver Aquarium. What were they doing in an aquarium I have no idea, but 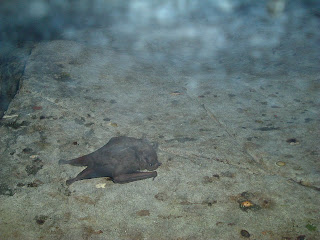 there were a number of non-aquatic animals there, including the bats. I didn't complaint, the more animals the better, especially those you can barely see in normal times. Since they were in an enclosed environment, I could successfully take a few pictures of them.

Bats are basically flying rodents, so I don't know why I love them. I think it is partially due to their somewhat sinister reputation, their associations with vampires (I am a big fan of the original Dracula novel and of old horror stories in general), Halloween, horror in general and their mysteriousness. Batman is probably my favourite superhero, maybe it is a reason for me liking bats or my liking of bats a reason for this preference. Anyway, I also see bats as shy creatures, frail looking and vulnerable. I don't feel the same for mice and other rodents. And the bats we have here are most likely insect eaters, so they keep the flies level low during those hot summer days. But overall, I love them because they are so cool.
Posted by Guillaume at 11:07

Well as long you don't have 'bats in your belfry" you're doing good! ;o) Great photos!