I watched a documentary recently (I think it was on Channel 5, Extraordinary Animals I believe) about ravens and crows, showing how intelligent they were. They have excellent memory and some ravens even use tools to pick up their food, something only apes and humans do in the animal kingdom. I just find these kind of documentaries and 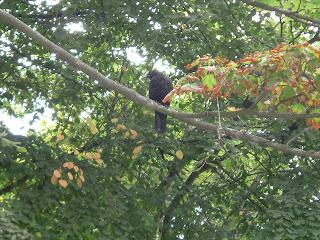 what they teaches us fascinating.

Ravens and crows often have a bad reputation in the West. In Middle Ages, they were associated with disease and plague. I read once in a Dictionnaire des symboles that negative associations was probably due to the fact that corvids were stealing harvest to primitive cultures. That and their colour, which But on a more positive association, Odin had two ravens at his service. As a child, I didn't like to hear crows in the morning. I now admire them greatly, but I still like the sinister myths surrounding them. In our Dungeons & Dragons game, my brother had the brilliant idea to have the god of evil in our world be associated to ravens and his servants and worshippers using the raven as an emblem. Sauron was a burning red eye, Voldemort was a snake, our darklord is a raven opening his wings. Geniusly sinister.

But in the real world, they are just among the smartest birds one can ever find.
Posted by Guillaume at 09:41

Ravens and crows are my absolute favourite birds.

There's a really good book on them called Mind of the Raven by Bernd Heinrich. Very interesting. I read it a few months ago...

I think it's crows that remind me of someone laughing when they caw.

@Jazz-Interesting book. I might read it one day.
@Leigh Russell-They might be laughing, for all we know. They certainly have some attitude.