There is no such thing as plain pasta 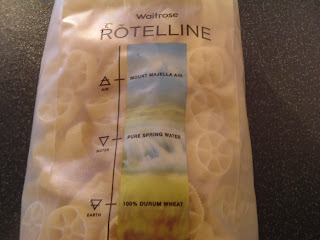 This is what my Italian friends taught me. And that's probably all I learned from them (sorry guys and gals, if you ever read this blog, but it's not like my Italian improved tremendously with you). I will start another food post, but I will try to give it a cultural aspect. A little bit of background now (bear with me for a little while). I spent my first year in England with Italians (mostly). A Spanish guy, a Greek guy and a handful of Italians. We had what we called kitchen parties when we were drinking tea, infusions and eating biscuits, we also had a few drinking evenings (I mean real drinking, I mean alcohol) when they got quite drunk with barely any booze, which was cheap wine and some English beers. We drove the non-foreign neighbours of the hall of residences we were in crazy (because my Italian friends were quite loud, even sober), but we enjoyed ourselves. The conversations were a mix of English (between the non-Italians and them), French (between the Spanish guy and I, and the few Italians who knew a few French words) and Italian (between the Italians, who barely knew English). I called our community Little Italy, but it should have been christened Little Babel. In the end, I probably didn't study as much as I should, my English barely improved that year and those Italians taught me close to zilch Italian except a few words (that said, I managed to understand them, sometimes). Long story short, I learned to love pasta and some of Italian culture.

So we had pasta tonight, anyway. It was just those wheel pasta (rotelline), we bought them at Waitrose, so they are good quality pasta. As you can see on the pic 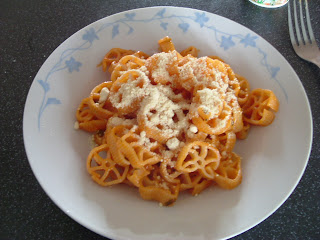 ture up on the left, Waitrose sure knows how to make it appealing: it's made of perfect wheat, pure Italian water and air from the highest Italian mountains or whatever. It takes only eight minutes to cook, and with only some tomato sauce and cheese (well, vegan cheese, the only one we had left), it gives what you can see on the picture below. It was absolutely delicious, but not very filling. The moral of the story is this: pasta is simple, but it is never plain. It got me through university life and made me enjoy many meals when I had no cooking skills whatsoever. It is now getting Veggie Carrie and I through marriage without me missing meat too much.
Posted by Guillaume at 19:42