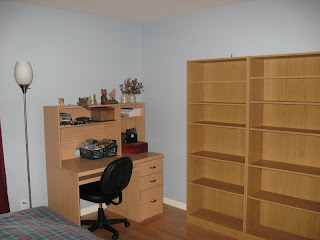 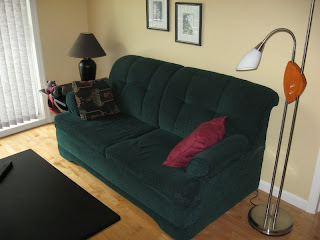 So, as I said in this blog entry, the apartment that was my home in Montreal for more than six years got sold recently. It had to happen, but it still saddens me. As I explained to my Francophone readership, it is the only place I could genuinly call home. I loved the old Liverpool house I was in, I loved other cities, I am living at the moment in a decent flat, but it is only in my apartment in Montreal, that I really felt I was where I belong to. I might feel like this in other places in the future, but nothing so far as been so much like me. So I decided to give you a glimpse of my home. The pictures were taken by my brother for potential buyers, so they are a bit impersonal. The bookshelves in my bedroom got emptied before he took the pics, so it does not give a clear impression on how it was when I lived there. It doesn't quite look inhabited. But this is it, home sweet home. Last time I saw it was in January 2007, before I went back to Liverpool. I didn't know it was going to be the last time I saw it. I'll tell you one day many anecdotes that happened in the place, feasts we had, drinking nights, etc. 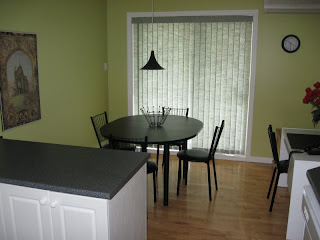 That's cuz it was so dark all the time. He's a vampire!

PJ-La chambre était verte au départ, assez sombre, on l'a repeinte en bleu ("bleu de Manhattan") en 2004.
Eugenue-I'm not a vampire (although I love vampire stories), but I sometimes enjoy dark bedrooms. Ours here has white curtains and therefore gets very light during daytime, unless it's very cloudy outside. So we wake up very early in the morning.