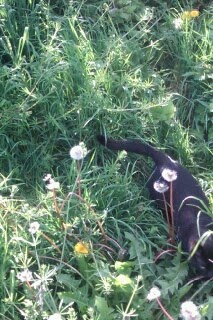 This (very bad) picture was taken yesterday, at the train station after work, as I was waiting for my train to go home. It was of one of the cats that dwell by the train station, in the shrubbery next to the gate or even on the railway. I stopped counting them. This may or may not be the black cat I saw right after the interview that got me the job I now have. I nickname him/her and/or the potentially other black cats Mephisto, sort of Mephistopheles. He is one daredevil: I saw him more than once prowling on the tracks. Yesterday he walked on the railway, then took one of the holes that are behind the gate and lead to the shrubbery right by the station, where he spent a lot of time. I was looking at hi, trying to take a good picture (this one being the less bad I took), then he looked at me, and jumped from the long grass on the bridge, started running on the station just as the train was coming. It was impressive.

Of course, every black cat reminds me of, well, my black cat. Unlike Odin, this one seems very feral, although somewhat chubby. Mephisto may not be scared of humans, as he sees many commuters daily, but he never stops to receive a cuddle. He seems happier hiding in the green herbs, the flowers, the bushes and walking on the rails. I miss being friend with a black cat, heck, any cat would do, but a black cat would be pure bliss. I cannot create a friendship with Mephisto, he cares little about humans, but I do find his presence at the station enjoyable in a soothing. He is such a beautiful, proud feline creature.
Posted by Guillaume at 22:28

he is a hobo living by the tracks!

He DOES look very feral in that photo.

Black cats seem to stick out in a crowd don't they. they feel special.

Thank you all for commenting. I knew that it would be a popular post, in spite of the lousy picture. Next feline post will be about Odin.