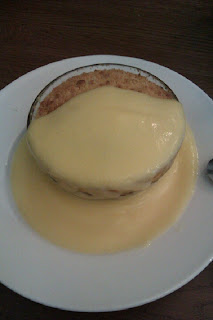 As I do sometimes, or as I started doing as a new sort of blogging tradition, I am plugging a restaurant/food joint or pub which I particularly enjoyed. This one I found in London, on my last trip there, or more precisely in Greenwich, of all places. It is called Goddard's and it is a pie specialist, traditional British pies, savory and sweet. It exists since the 1800s and it is the kind of place I love to go to. The food is simple, honest, hearty and surprisingly cheap, especially in London. I had a traditional mince beef pie, which reminded me of our own Quebec pork pies, except that it was beef. With traditional leek sauce on it, and traditional malt vinegar because it is the traditional way to eat it. With mash potatoes (double portion, for some reason I thought I'd needed a double portion, boy was I wrong about that). And I had a real ale to down it.

For dessert, I had an apple and blackcurrant pie, with an ocean of custard on it, as you can see on the picture right. The picture was taken with my phone, so it is not a very good one. I am usually not a big fan of apple pies, but mixing with the blackcurrant it just gave it a whole new taste, pretty much to die for. I could not finish the dessert, or the beer, which is a darn shame, especially for the dessert. Maybe I should have asked for a doggy bag. The pies are daily fresh and very filling, both main meal and dessert. It was delicious, but almost too hearty for the day. I think Goddard's is a perfect place for a cold autumn or winter day. In so many words, I loved this place.
Posted by Guillaume at 22:55

The double mashed did you in.

I think it did. Next time it will be double pie, but just one portion of mash.