The mystery of Odin the cat revealed 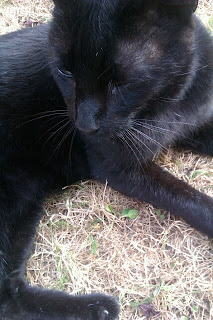 I hope my readership does not mind another post about Odin in such short period of time (last one was two days ago). I had an evening that was both sad and happy. Happy because when I got home, I saw Odin waiting for me. Well, he was waiting for someone, maybe not me especially, but anyway. After a few minutes of me stroking him and him rubbing against my legs and purring a lot, I gave him his usual tuna, as he was obviously expecting it. He ate it eagerly and I think he could have eaten more. I cannot adopt Odin, as I live in an attic flat, but I thought I could certainly ease his life and become friend with him (gosh I sound like a crazy cat lady). I even bought a bit of cat food to vary his diet a bit. Since I first met him, I always thought he was a feral cat that had it rough: the fact that he has one eye and plenty of scars and no collar made it quite obvious to me.

But later on, the mystery of Odin was revealed, at least partially: as I was walking in the street near home, there was a couple outside, the front door of their house open as they were putting some stuff in their car parked on the street. Odin suddenly walked out of the house, to the utter indifference of its owners. He was not an intruder, he was certainly welcome there, so I think it is safe to say that he has masters, or that he is their master (as cats own you more that you own them). I wish they had given him a collar, I wouldn't have felt so sad seeing him getting out of their house. It still does not explain the glass eyes and the scars. Maybe they adopted him properly and Odin is really a feral cat they found on the street. Anyway, Odin was still waiting by the door minutes later and still asked for some more cuddles. So I have a friend. And of course I will feed him some more.
Posted by Guillaume at 23:01

Cool story.. Odin is a very friendly cat and he knows Friendly cats get yummy treats. anyway maybe he deserves a few extra treats since he must have gone through some misery to be a one eyed cat. I still think he really likes you just for you being you. He knows a friend when he sees one. and friends like you have helped him survive this long. Cheers.
Thanks for sharing.

That crafty Odin probably has a whole circuit of people he visits for cuddles and food. I'm glad he has an actual home too.

@Gwen-He sure receives yummy treats. I hope he likes me for myself, but it is difficult to know with cats.
@Debra-That's what I think and that's how I should feel about him having a home. It means there's a place where he is safe.