The return of Odin 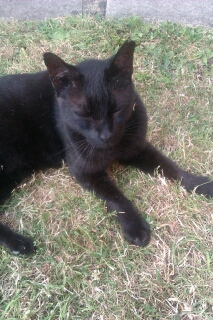 I have blogged a few times about Odin the black cat that comes around here sometimes. I christened him Odin as he has one eye, like the king of the Norse gods. I had not seen him in a long while and tonight, when I was walking back from work, he was there, as if he had been waiting for me.Tonight, I have decided to feed him, as I am not sure he has so many full meals. He must be naturally an adequate hunter, but with one eye to see, you never know. I gave him part of the content of a tin of tuna. he ate it eagerly. When I first met him, he was after my fish and chips. I had felt guilty about not feeding him then. As I cannot adopt Odin, I will at least try to become friend with him and show him and give him some treat. I don't think he had it easy, with all the scars he has.
Posted by Guillaume at 21:21

A little kindness always seems amazingly appreciated by animals, even if they're still too skittish to trust humans (and who can blame them).

You picked a perfect name for this kitty!

Oh yes, please DO feed Odin whenever he appears. Keep some small cans of cat food handy for him. Even though you can't adopt him, you can help ease his life on the streets.

@The Gill-Man-It is such a fitting name for him. Sadly he didn't show up after Tuesday, when I fed him tuna again.
@Debra-I think so too.